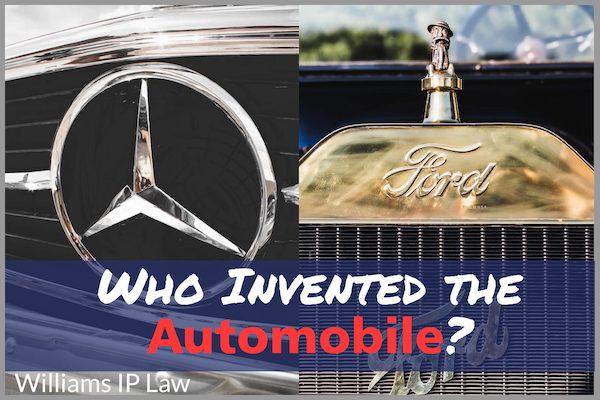 When it comes to American society and culture, few inventions have been as instrumental as the automobile. That leads many to assume that the car was invented in America, perhaps by Henry Ford.

However, this is not the case. Most historians agree that the first true automobile was invented by Karl Benz. His patented, three-wheeled Motor Car, which was popularly called the “Motorwagen,” was introduced in 1886. By most definitions, it can be considered the first of the modern automobiles.

Benz was a prolific inventor who also obtained official protection for a carburetor, a water radiator, gear shifters, spark plugs, a throttle system and a variety of other components that are considered basic to automobiles. You might even recognize the Daimler Group name, the car company that Benz founded.

While Karl Benz may have produced the first real-world, working automobile, he was not the first to imagine such a contraption.

No less a luminary than Leonardo da Vinci left numerous sketches of mechanized carts that did not require horses in the early 16th century. Inventors in China built wind-propelled sailing chariots quite early. Westerners were captivated with the idea, and by 1600, Holland had a sailing chariot that was capable of carrying nearly 30 people and could travel approximately 40 miles in a period of two hours.

A self-propelled steam-engine vehicle was built by France’s Nicholas-Joseph Cugnot in 1769. His invention was mainly used to move pieces of heavy artillery. It moved at a walking pace and operators had to stop at 20-minute intervals to give the machine the time it needed to build up additional steam.

Similarly, the meaning of “car” has morphed over the centuries. Drawing toward the close of the 19th century, many people were familiar with the word “streetcar,” which referred to a tram. Before this, people used “streetcar” to refer to omnibuses that ran on rails and were pulled by horses.

When the earliest cars were introduced, they frequently were referred to as “horseless carriages,” and the word “automobile” comes from the French.

What About Ford and Other Innovators?

Although Karl Benz is credited with manufacturing the first modern-day automobile, he certainly wasn’t alone in his efforts. Many other creative individuals were working on similar projects at the same time.

Henry Ford was just one of these. Historians agree that it was Ford who truly made cars accessible to the masses, changing driving from a hobby for the rich into a fundamental aspect of daily life for people in every social level.

Although Henry Ford did not invent the automobile or the assembly line, he is recognized as having been an innovator who combined the two and perfected the process of efficiently building cars.

What made Ford’s most recent effort different from his earlier ventures? Instead of focusing on just manufacturing cars, he had turned his emphasis to producing cars in considerable volume. At the time, most companies that were building cars were operated by people who had been in the business of building coaches. These vehicles were built in time-consuming and laborious hands-on processes by master craftsmen. Accordingly, the cars produced by this company were expensive, and most people could not afford them.

Ford’s innovation was a desire to build “a motorcar for the great multitude.” The Model A and the Model N were already being produced and sold, but Ford now turned his attention to the Model T. When Ford introduced this car in 1908, it was probably the easiest car in existence in terms of drivability and repairs. This made the Model T extremely popular, but Ford was still determined to build more of them and lower the price.

That’s when Ford began manufacturing the Model T on an assembly line. The process was repeatedly tweaked and perfected until, in 1913, it was possible to built a Model T in a mere two and-a-half hours.

Where would early cars be without the internal combustion engine? This type of engine relies upon the explosive combustion of fuel to push a piston that is housed within a cylinder. The movement of the piston turns the crankshaft, which is connected to the car’s wheels.

The earliest roots of the internal combustion engine go back to 1680 when Christiann Huygens designed an engine that was fueled by gunpowder. Unfortunately, Huygens was never able to build his design.

In 1826, an Englishman by the name of Samuel Brown retooled a steam engine so that it would burn gasoline. The engine was attached to a carriage, but his invention never really took off.

By 1873, American George Brayton had developed a two-stroke engine that ran on kerosene. In the same decade, a German inventor, Nikolaus August Otto patented a four-stroke engine.

French inventor Rudolf Diesel patented the diesel engine in 1895. His invention was highly efficient and featured a compression ignition.

The Road to Innovation Is Winding

As you can see, it is impossible to say that a major invention like the automobile can be attributed to just one person. Instead, there are incremental improvements, some of them occurring over centuries.

What will you create today that might inspire the inventors of tomorrow? It’s impossible to say, but it is essential that you protect your hard work by seeking patent protection.