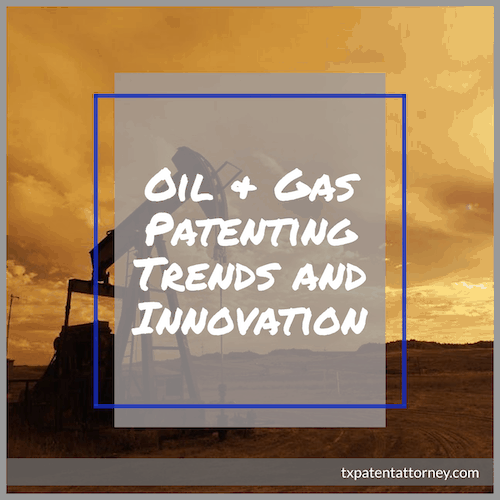 The oil and gas industry has always been an innovative one. Over the decades, drilling for natural resources has required ever-more-sophisticated technology to tap into reserves that were unknown or impossible to exploit for earlier generations.

Consequently, the oil and gas industry has always pursued a multitude of patents. While that remains true, the protected technology has certainly evolved. Keeping up with these trends makes it possible for entrepreneurs and organizations to stay on top of the industry and remain competitive.

Today, most oil and gas industry patents are focused in areas such as:

Earth drilling is by far the most frequently used technology in the field. It comes as no surprise then that most industry patents cover some aspect of this technology.

In an interesting trend, as the world emerged from the Great Recession that began in 2008, patent filings increased overall. However, patent applications in the oil and gas industry did not experience quite the same robust growth rate. Moreover, the focus of these patent applications had definitely switched to the areas listed above, with hydraulic fracturing receiving an even greater emphasis.

Hydraulic fracturing, which commonly is referred to as fracking, involves cutting-edge technology in this field. A fracking fluid is pumped into an oil well under extreme pressures. The introduction of the fluid causes underground rock formations to fracture. These fractures stimulate the production of oil and gas.

Fracking techniques may be combined with horitzontal wells to reach previously unobtainable reserves.

Since 2006, oil and gas companies have filed approximately 1,000 patent applications related to fracking technology. The number of filings in this area has steadily increased each year, with the covered technology relating to both the tools and methods that are needed to exploit oil reserves.

Many players in the industry are seeking coverage for other technologies that are related to fracking. These may include systems and tools for monitoring fractures and proppants, finding the best positioning for horizontal drilling operations, controlling the heat resistance of fracking fluids and treating the waste products that are left over from the use of fracking fluid.

As companies in the oil and gas industry have increased the number of patent applications they are filing, the opportunities for infringement have multiplied. Recall that the innovations that are disclosed in a patent application are afforded some level of protection as soon as the application is filed. The U.S. is now a first-to-file country, which means that the first party to file an application for a given technology is regarded as the first to have come up with the idea.

Accordingly, it is possible for patent applicants to begin informing others of their rights whenever they suspect that a competitor is somehow using their proprietary technology. The publication of the patent application, which frequently occurs approximately 18 months after filing, can serve as notice to competitors that they may be infringing.

Research suggests that most oil and gas industry related patents are being filed in the United States, China and Japan. Consequently, it is sensible for inventors or their employers to file patent applications at least in the U.S. to protect their ideas. It also may be worthwhile to consider filing national-phase applications in China, Japan and elsewhere that the technology may be used or infringed upon.

Future of Oil and Gas Innovation

IoT has improved production and worker safety Sensors placed inside wells, blowout preventers and choke valves has provided the ability to monitor remote areas in real-time. This data helps engineers to react quicker and predict when equipment will fail. This minimizes maintenance costs and streamlines the entire process.

The legal professionals at the Williams IP Law have considerable experience in the oil and gas industry. In the course of our practice, we have filed U.S. as well as PCT and national-phase patent applications. Partnerships with other intellectual property attorneys around the world make this a cost-effective and convenient process.

If you have an innovation that you would like to protect with a patent or are concerned that a competitor is infringing your rights in the oil and gas industry then it’s time to schedule a consultation with Williams IP Law.