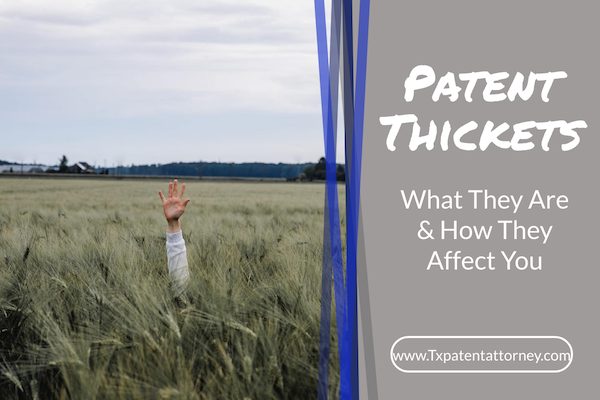 What is a patent thicket and how does it affect you?

If you have ever seen an overgrown garden, then you probably know what a thicket is. That tangled mass of brush and branches looks as if it would be impossible to sort out. Pull on one branch and a dozen others might come along with it.

A patent thicket is a lot like the thicket in a neglected garden. It’s a cluster or grouping of patents that are more or less dependent upon each other. When a single entity constructs a thicket of patents it can be argued that they are doing so in an effort to prevent competitors from entering the market. Alternatively, several entities that are all in the same or a similar industry can create a patent thicket as they all compete to own the most innovations.

One of the more recent and recognizable patent thickets concerns smart phone technology. The cell phone industry has a lot of major players including Apple, Motorola, Google, Samsung, HTC, Nokia and others. Each of these companies continuously files patent applications aimed at protecting even incremental improvements in their technology. At the same time, they are busily filing lawsuits against each other. For instance, the “swipe to unlock” feature that is common on many smart phones is the subject of U.S. Patent No. 8,046,721 to Apple. However, this feature is found on the smart phones of many other manufacturers. Some of those manufacturers have doubtless licensed the right to use the technology, but others may have simply made use of it without asking permission. It’s behavior like that which leads to lawsuits.

In the cell phone technology field alone there are thousands of patents. Each time an inventor makes an improvement a new patent application is filed. Imagine that a new manufacturer wants to get into the game. They have some unique, innovative ideas, but they’re going to have to borrow some technology from Apple, Samsung, Google and others to get the job done. After already pouring perhaps thousands or millions of dollars into their own invention, this new entrant to the industry is faced with having to make licensing deals with all of these heavy-hitters, some of whom may not agree to let the upstart use their technology at any price.

Ugly Side of Patent Thickets

Faced with this kind of daunting task, many entrepreneurs decide that the effort simply isn’t worthwhile. They can’t come to terms with the big corporations who ask for ridiculous amounts to use their technology, and any product they bring to market is certain to infringe a number of patents which will undoubtedly lead to lawsuits.

That’s why economists and inventors tend to get concerned when they see a patent thicket. There’s a fear that all those closely related patents may stifle creativity. However, there may be other ways to capitalize on an invention that’s aimed at technology where a patent thicket exists. With the help of an experienced intellectual property attorney it may be possible to explore other avenues for getting a new innovation off the ground.

If you need any patent assistance in Texas please contact the Law Offices of Jeff Williams for a free intellectual property consultation.