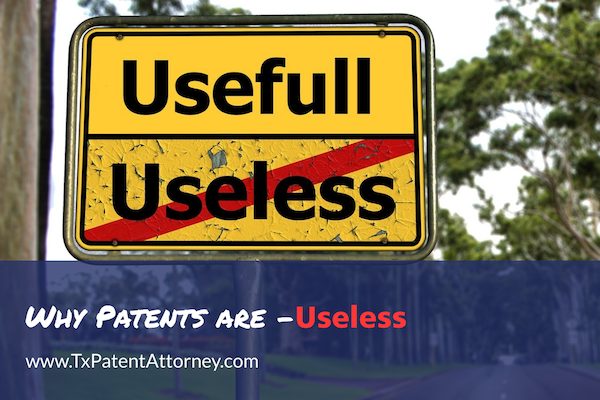 Most patents are useless. Does that sound like a nonsensical thing for a patent attorney to say?

It might at first glance, but the unfortunate reality is that many patents are so poorly drafted that they do not do an adequate job of actually protecting the subject invention. Other patents are worthless because they are aimed at inventions that are not marketable or products that are just too expensive to manufacture.

This means that an inventor could spend tens of thousands of dollars obtaining a patent that isn’t worth the paper it’s printed on.

That runs contrary to the hopes and dreams of most inventors who visualize being able to make back the money they spent on research, development and pursuing patent protection once they have a patent that they can monetize.

Patent attorneys have a rare perspective on this phenomenon. On an almost daily basis, we get to speak to inventors at all stages of the process. Many of them are hopeful and filled with dreams. These usually are the individuals who have not been through the process of obtaining a patent before. Maybe they don’t know much about the process. Perhaps they think that it will be quick and easy, and that they will soon recoup their expenses once they have a marketable product.

Other inventors are quite different. Feeling frustrated and cynical, they’ve been through the process before. What began as a hopeful venture eventually became an exercise in consternation. They got a patent, but it was expensive and painful to do so. Even with an issued patent, they haven’t been able to get their product off the ground.

Rare individuals have obtained patent protection and were able to successfully bring a product to market. They may have made their fortune through licensing deals, and they technically don’t have to work for a living anymore. What makes their patents different?

Reasons Why Patents Can Be Worthless

Why did the inventor who is feeling frustrated end up in this situation? Frequently, it’s because the invention just isn’t marketable.

Imagine you’re an inventor with a great idea. You feel a rush of exhilaration, and you want to be certain that no one steals your idea. Patent protection is essential, right? So the inventor rushes through the process, filing a patent application as quickly as possible.

However, it’s wise for the inventor to press the pause button instead of rushing forward. The most critical question to answer is: “Is this idea marketable?”

In general, this is not a question that a patent attorney can answer for you. An inventor probably knows more about the particular industry and customer base to which this product might appeal.

Too many inventors don’t take the time to research the market. In other words, it is essential to test the market before rushing into things like expensive prototypes and equally expensive patenting.

While the inventor may believe that they have solved a problem, it is critical to determine if others are looking for a similar solution. If the inventor skips this, then they won’t be able to license their invention, and crowdfunding efforts are likely to be for naught.

Many inventions are the victims of overdesigning. In fact, it’s not unusual for a patent to give little or no thought to manufacturing. Does a machine exist that can make that product? Can an existing machine be retooled to manufacture the invention? If so, how expensive will that be? Prohibitive costs may mean that no company wants to try to make the product, leaving the inventor to perhaps go it alone. Becoming a manufacturer is no small feat in itself. Most inventors just don’t have the budget for it.

When people apply for patents for products that no one wants or are too expensive to make, the only entity that makes money is the United States Patent and Trademark Office.

Is Your Invention Patent Ready?

Before you pay filing fees to the patent office, do your homework. A simple Google image search may be enough to tell you that your invention already exists. In order for any idea to be patentable it must be new and distinctive when compared to existing products.

You’ll also want to take steps to find out how much it might cost to manufacture your invention. Begin by looking for any similar or related products online. Amazon and Google can be helpful in this. How much are other products in this category selling for?

Then, try to contact U.S. manufacturers to obtain a quote, taking care to obtain a signed work-for-hire agreement first. You can learn more about manufacturing by viewing videos on YouTube or visiting factories in person.

For this next step, you’ll want to work with a qualified patent attorney. A prior art search in the records of at least the U.S. Patent and Trademark Office will uncover earlier patents and applications that may be the same as or similar to your invention. A patent attorney can help to put these prior art references into perspective. Does your invention infringe the subject matter of any of these patents? Having a legal opinion can help you determine whether or not it’s worth moving forward.

Take the Next Steps