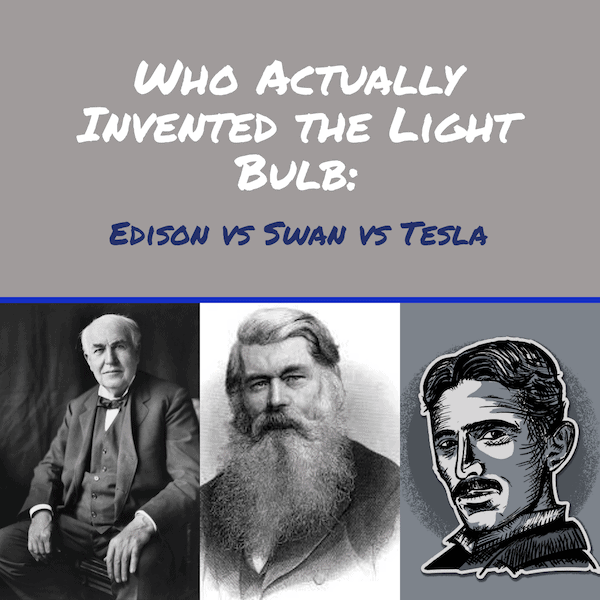 Ask any child, and he will probably tell you that Thomas Edison invented the incandescent light bulb.

It’s a good story; one that relies on a popular myth of American individualistic invention. However, it’s definitely not the whole story.

Here is a brief look at some of the individuals who contributed to this effort.

Joseph Swan was just one inventor who made improvements in light bulb technology. He was working as a chemist in England in the middle of the nineteenth century when he began development of a more affordable light bulb. His invention replaced the previously used platinum filaments with carbonized paper filaments.

Unfortunately, for Swan, it turned out that while his carbonized paper filaments worked fairly well for demonstration purposes, they were not practical for everyday use. They simply burned out too quickly

The good news is that other inventors were waiting to make improvements to the light bulb.

We’ve already established that light bulbs were in existence even before Edison was born. One of his innovations was built directly on Joseph Swan’s incandescent light bulb.

Edison made the filaments thinner, giving them greater electrical resistance and ensuring that only a small amount of current was needed to create a glow. In 1879, Edison publicly demonstrated his refinements, which Swan quickly adopted. Swan then established an electrical lighting company in the U.K.

Edison sued, but the claims in Swan’s U.K. patent were strong. The two joined forces, forming Edison-Swan United and eventually becoming one of the largest light bulb manufacturers in the world.

In effect, Edison is credited with buying the patent for an incandescent light bulb. With these rights acquired, he was able to make improvements to the design that made it possible to provide electric light to the general public. Moreover, Edison was the consummate self-promoter, which enabled him to claim that he was solely responsible for the development of the light bulb.

Nonetheless, Edison was confronted with the massive problem of actually bringing electricity into American homes.

Nikola Tesla was born in Europe in 1856. He emigrated to the U.S., where Edison sought him out in hopes of working together. Tesla helped bring new innovations to Edison’s inventions, but their working relationship didn’t last for long.

It appears that the two men disagreed on any number of topics. However, their most famous point of disagreement related to electric current. Edison was wholeheartedly behind the idea that direct current, or DC, was the way to bring electricity into homes.

Tesla believed that DC was insufficient and weak. Instead, he advocated for alternating current, or AC. With his invented induction motor, Tesla felt that it was possible sustain and regulate higher voltages using AC.

Edison and Tesla became embroiled in a nasty fight to prove the worthiness of their theories. In the end, it was Tesla who would triumph, and his AC system would be used to electrify America.

So, who actually invented the light bulb? The reality is that today’s light bulb is the result of countless hours of testing, trial and error by hundreds of different inventors over the course of more than 100 years.

Whether your invention is as revolutionary and necessary as the light bulb or has limited application within a particular industry, your innovation is worth protecting. Speak with an attorney from Williams IP Law to learn about all of the options that are available to you.