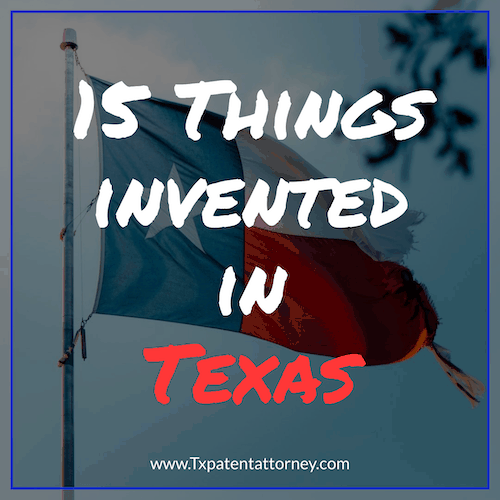 Did you know that many of the world’s most famous and useful inventions were created right here in Texas? It’s true!

Read on to learn more about these home-grown innovations.

15. Calculators that Fit in Your Hand

In the 1960s, an electronic desktop calculator was among the most sophisticated machines for doing arithmetic. Texas Instrument revolutionized the landscape with the invention of the first handheld calculator in 1967. Called the Cal Tech, the device was put on the market in 1970.

Founded in 1963 by Mary Kay Ash, this Addison, Texas company was declared in 2018 to be the world’s sixth-largest network marketing company. Its distributors, who are called beauty consultants, may be rewarded with a distinctive pink Cadillac if they are among the company’s top sellers.

Mariano Martinez was onto something in 1971 when he modified a soft-serve ice cream machine to mix margarita ingredients. Martinez got the idea after visiting a 7-Eleven with a slushy machine. He decided to invent a margarita that could be pre-mixed, frozen and then served whenever it was wanted. Although vendors of frozen drinks were skeptical, Martinez proved them wrong.

Brewed at the Spoetzl Brewery in Shiner, Texas, it’s difficult to name a more iconic Texas brand name. The brewery was founded in 1909 by Kosmos Spoetzl, a Bavarian immigrant. Spoetzl spread the word about Shiner Beer by leaving free bottles of beer on fence posts to be enjoyed by hardworking farmers. Shiner was eventually distributed to Austin and beyond.

Like many great inventions, the creation of the first ruby red grapefruit was an accident. Grapefruit trees had been cultivated in southern Texas as early as the late 19th century. Growers were constantly experimenting with new varieties, which led to innovations like the pink grapefruit. One day in 1929, a farmer noticed mutated red grapefruit that was growing on a pink grapefruit tree. The flesh of the fruit not only was red but also far sweeter than existing grapefruit varieties.

Most people probably think that 3-D printing is an ultra-modern invention. Actually, it has its roots in an invention known at selective laser sintering, which was developed by a University of Texas graduate named Carl Deckard. Deckard was still a student when he began working on his invention.

In the early 1960s, two surgeons in Houston noted that a plastic blood bag felt remarkably like the female breast. From this moment, a revolution in the plastic surgery realm was begun.

8. Nachos at the Stadium

The humble yet tasty stadium nacho has its roots in a 1976 Texas Rangers baseball game. Inventor Frank Liberto was doing some experimentation when he discovered that cheese could be dispensed from a pump after being diluted with jalapeno juice and water. The rest is history.

Most people don’t know that Michael Dell, a student at the University of Texas, started his company when he began selling personal computers from his dorm room. Dell never looked back, and now the company boasts more than 100,000 employees.

Texas Instruments inventor Jack Kilby was hard at work in 1958 when he developed the world’s first integrated circuit. The invention was the precursor to the microchip, which was the innovation that made it possible to shrink computers from room-sized to pocket-sized.

One of America’s most popular soda brands had its genesis in 1885 when it was served in a Waco, Texas drugstore. Developed by pharmacist Charles Alderton, the product was taken nationwide in 1904.

Little girls growing up in the 1990s were wild to wear the inverted ponytail style that was made famous in the animated classic Beauty and the Beast. The Topsy Tail made it possible to do so with ease.

These curly corn chips were invented by Charles Doolin in 1932. Originating in San Antonio, the little chips were a huge hit in Texas before being brought onto the world stage.

Bette Graham was working as a typist in Texas during the 1950s when she came up with one of the best inventions ever. Her Liquid Paper could erase mistakes with ease, and it quickly became a lucrative product.

Now adored across the country, Whole Foods Market was created in Texas back in 1980. Initially called SaferWay, the small vegetarian food store eventually grew to have hundreds of locations.

Are you developing the next great idea to come out of Texas? If so, then you need the guidance of an experienced intellectual property attorney. Contact Williams IP law to learn more about how to protect your creation.