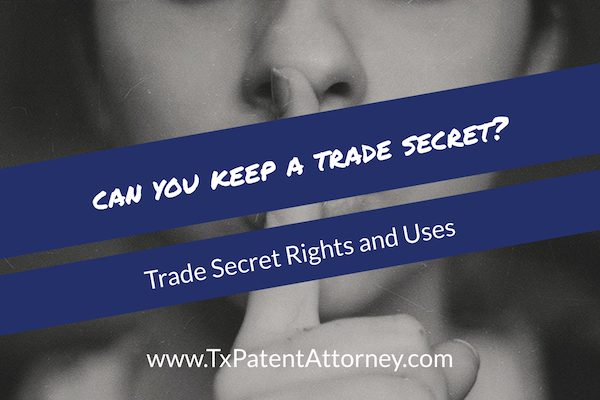 However, what if your company has something that they would like to protect, but keep secret? Several famous examples of “trade secrets” exist. These include Kentucky Fried Chicken’s 11 herbs and spices, the secret formula for making Coca-Cola and the search algorithm that Google uses.

Why didn’t these companies decide to patent or otherwise protect their IP via the various mechanisms that are available under U.S. law?

It’s because they wanted to keep their “secret ingredient” a secret. When you file a patent application, for example, it is essential that you disclose everything about the invention so that the United States Patent and Trademark Office can establish that it is non-obvious, novel and eligible for patent protection.

This means that any proprietary information that goes into your invention will eventually become public knowledge. When your patent expires, your technology becomes available for others to use.

However, when you protect something as a trade secret, then you have the potential to keep it a secret in perpetuity.

What Can You Protect with a Trade Secret?

Trade secrets can protect an array of things, from an ingenious idea that gives your firm a competitive edge to the marketing plans for your newest product. Similarly, customer lists can be protected as trade secrets as well as information regarding prices and costs.

Some companies even protect negative know-how as a trade secret. This basically refers to anything that they have learned to not do through extensive research and development. Sometimes, this information is just as valuable as the ingredients that successfully make up your secret.

Essentially, a trade secret can be almost any information that is valuable to your company and generally isn’t known to the rest of the world, especially your competition.

What Rights Does a Trade Secret Grant?

If a company chooses to keep some information as a trade secret, then they have the right to prevent certain people from using or benefiting from that trade secret.

Some of these people are automatically bound by a strict duty of confidentiality. This applies to any employees who work with or are knowledgeable about the trade secret.

Trade secrets also give you legal protections in the event that your proprietary information is illegally obtained via bribery or theft. A company with a trade secret further can prevent people who accidentally discover the secret information from profiting from it as well as those who are asked to sign a non-disclosure agreement before the confidential information is shared with them.

However, a trade secret does not grant a company any rights if another party independently discovers the trade secret. As an example, there is no law that prevents someone from reverse engineering a product that is only protected as a trade secret. This means that theoretically someone could analyze the formula used to make Coca-Cola, discover its precise ingredients and then start making and selling their own version of Coca-Cola. Because Coca-Cola’s formula is only protected as a trade secret, they would have a lot of difficulty stopping the inventor from profiting from his knowledge.

How Does a Company Protect a Trade Secret?

Businesses have to do more than just call a certain piece of information a trade secret. Instead, it is necessary to take affirmative actions that will protect this information and keep it confidential. Many companies will take extreme measures to keep their information strictly private.

This is the case with the makers of Coca-Cola, as the formula is locked in a bank vault that is only able to be opened after a resolution is passed by the board of directors. Only two company employees are ever allowed to know the formula at the same time. These employees are forbidden from flying on the same airplane, and their identities are never made known to the public.

Most companies do not have to go to such extreme lengths to protect their trade secrets. A few reasonable precautions generally are all that is required.

For instance, it is wise to mark any documents with “Confidential” if they contain any trade secret information. All trade secret materials probably should be locked away in a safe or other secure area after hours. Another sensible measure is to beef up any computer security protocols to ensure that hackers and other bad actors can’t gain access to sensitive information.

If you do have trade secrets, then you’ll probably want to limit how many people actually have access to that information. Ensure that your employees are bound by a duty of confidentiality, preferably with a written document, and do the same with anyone who is not an employee but who must be told about the trade secret for any reason. A proper non-disclosure agreement is a simple document that can help to protect proprietary information under just about any circumstances.

Talk to a Lawyer About Protecting Trade Secrets

If you have proprietary information that you believe would be best protected by keeping it as a trade secret, then contact the Law Offices of Jeff Williams. Mr. Williams is an experienced intellectual property attorney who can help you to understand your rights and devise a strategy for protecting proprietary information.